Are you looking for lesser-known facts about Delhi? Here is a collection of interesting and fun facts about Delhi  which You’ve Never Heard Before as well as you can also read general information about Delhi  such as about culture, history, government rule, etc.Delhi, which is the capital of India. Delhi was founded by the Mughal emperor Shah Jahan in 1649 and named it Shahjahanabad. Delhi’s weather is very unique, it is very cold in winter and it is very hot in the summer. Delhi is a city with a big heart, hence it is said that “Dilli hai dilwalon ki!”.
Delhi has a historical significance in India and is also the best city in terms of tourism. There are many good universities in Delhi due to which the first choice of students for education in Delhi.In this post, I am going to tell you some amazing and interesting facts about Delhi.

The capital of India, Delhi is called the heart of India. Delhi is one of the most popular tourist destinations, in India because the city of Delhi is much smaller in area than other states of India but there are many places to visit and see. There are many universities in Delhi, due to which children from all states, come to study. By the way, Delhi has many characteristics, but we will tell you such facts which may not be known to Delhiites themselves. Delhi is known for its historical monuments and heritage. Some of the information related to Delhi makes it an ideal city and capital. Let us informed you to some of the unique facts and things of Delhi that make it an interesting place. 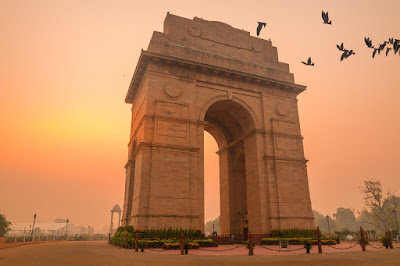 Amazing Famous Facts About Delhi For Tourists and Kids

1.Second Most Populated City in the World –

Yes, After the city of Tokyo, Delhi is in terms of population. Delhi is the second most populous city with 25 million residents. In 2016, the census recorded 27 million people living in the city. At present more than 2 crore people are in Delhi.

Khari Baoli Market in Delhi is Asia’s largest spice market. Khari Baoli Bazaar, famous since the 17th century, is located near the Fatehpuri Mosque, a historic area in Old Delhi. It was during the reign of Salim Shah that this market came to be known as Khari Baoli which means saltwater ladder well (Baoli means well and Khari means saltwater). Unfortunately, no trace of the terraced well can be, found at present. Khari Baoli market is not only limited to the wholesale market but, it has also, become a place to attract tourists. It is a high-quality market and, it smells of various spices sold throughout the centuries. Everything attracts the eyes a lot and keeps them eager to buy. Thousands of tourists can be seen in this market to buy Indian spices.

3.The only Baha’i temple in Asia is in Delhi

The Kamal Temple or Lotus Temple is a place of worship Baha’i (Iran a follower of a different religion founder Baha’u’llah) located near Nehru Place (Kalkaji Temple), Delhi, the capital of India. It is a unique temple in itself. The Lotus Temple of Delhi, which is called the Lotus Temple, is the only Bahá’í temple in Asia where the atmosphere is quite peaceful. Thousands of people come here from abroad every day. The temple was, inaugurated on 24 December 1986 but the temple opened to the general public on 1 January 1987.

4.The largest Hindu temple complex in the world

Akshardham Hindu temple complex in Delhi is the biggest in the whole world. Akshardham Temple is also known as Swaminarayan Akshardham Temple. It is one of the hugest Hindu temple complexes in India. The temple was authoritatively opened on 6 November 2005. It was included in the Guinness Book of World Records in 2007 giving it the ‘World’s Largest Comprehensive Hindu Temple. Its history and facts reflect the traditional 10,000-year-old Indian culture, spirituality, and architecture in Delhi. It has been built, in the memory of Jyotirdhar Swaminarayan. It is, grown over about 100 acres of land.

Nehru Place (Issue Place) is a famous market for IT computer hardware and accessories and is also known as Indian Information Technology Market. It is, located in the southern part of New Delhi, India. If you are planning to buy computer hardware, desktops, laptops, graphic printers, coops, etc. Then Everything is available in one place. Hence it can be described as the heart of the Indian IT industry. You can buy, pirated software at cheap, prices.

The entire public transport system in Delhi uses CNG gas. Everything from Delhi’s auto-rickshaws to the famous DTC bus runs on environmentally-friendly compressed natural gas (CNG). Because of which air pollution is controlled, to some extent.

The country’s capital Delhi is, also one of the greenest cities in the country. About 20% of the area, is spread, with greenery.

In May 2014, New Delhi was, declared as the world’s most polluted city by the World Health Organization (WHO).

10.The tower built by the world’s tallest brick is in Delhi

Delhi was once a walled city with 14 strong-walled gates. Now only 5 of these 14 gates exist. These are historical gates; Ajmeri Gate, Kashmiri Gate, Lahori Gate, Delhi Gate, and Turkman Gate.

Since 1931, Delhi has been the capital of many dynasties in capital history. The new capital of India, ‘New Delhi’ was declared by the British Emperor George 5 in 1911, but New Delhi took over as the full capital from 1931.

Delhi is also the largest city in India by area. Its area is about 1484 square kilometers.

14.Delhi, the origin of the name

According to some great people, Delhi got its name after King Dhillu who ruled the region around 50 BCE. While according to some other legends, the term refers to the word Prakrit language which was used by Tomaras (ancient rulers).

It is, said that the Delhi region is related to Indraprastha city of Mahabharata, according to which it used to be the capital of Pandavas.

Jama Masjid, which was built between 1644 and 1656 by the Mughal ruler Shah Jahan, is famous as the largest mosque in India.

There is a wholesale market in Azadpur Delhi which is said to be the largest market for fruits and vegetables throughout Asia.

There is a National Rail Museum in Chanakyapuri, Delhi which exhibits railway heritage. Tourists are given a tour of the entire museum by a toy train.

In 2014, Delhi Metro was, ranked as the second most popular system in the world. It is the lifeline of the residents and the most extensive metro facility in the country.

The Delhi Ridges Jungle Area is a habitat for many different species of birds. Therefore, New Delhi is the second bird-rich capital of the world after the city of Nairobi, Kenya.

The third century BC Ashoka Pillar stands in Feroz Shah Kotla, Delhi. Emperor Feroz Shah Tughlaq brought this 27-ton pillar from Ambala to Delhi where it was built, by the great emperor Ashoka.

22.Once upon a time village

Today’s residential areas of Delhi Willingdon Crescent (Lutyens’ Delhi) Connaught Place and Lodhi Gardens were, not counted in Delhi before they came under other villages.

23.Unusual Museum Of The Country

Sulabh Toilet International Museum of Delhi is a kind of bizarre museum where you will be surprised to see exhibitions. It is the kind of unusual museum in the world.

The Chauhan kings of Ajmer captured the Red Fort in 1180 and named it Qila Rai Pithora. According to the ancient remains of the museum and walls of the fort Rai Pithora, this first city of Delhi was discovered by Prithviraj Chauhan of the 10th century. Chauhan King Prithviraj III defeated the Muslim invader Muhammad Gori in 1192. In 1206, Delhi became the capital of the Ghulam dynasty. The first Sultan of Delhi was a Qutubuddin Aibak. Qutubuddin Aibak had started the construction of Qutub Minar to celebrate his victory but died before it was completed. By the British Government in 1911, the capital of India was changed from Kolkata to Delhi. The British made Delhi the capital in 1911-1912.

26.There are more than 50 Fire Brigade stations in Delhi. And here more than 3,000 firefighter work.

27.With 11 political areas, there are 95 Police stations to maintain law and order in the right way.

28.After the Eden Gardens of Kolkata, Delhi’s Firoz Shah Kotla Stadium is the oldest stadium in the country.

29.The number of registered cars in India is highest in Delhi.In India, most of the automobile is registered in Delhi i.e. the most vehicles are in delhi.

30.Delhi Metro, which covers approximately 277 km. It is one of the largest networks of the whole world.

31.Indira Gandhi International Airport is one of the busiest airports in South Asia. Here, hundreds of flights take flight in a day.

32.Delhi has been inhabited since the 6th century and it has been the capital of many empires. For this reason,
it has been destroyed and made several times.

36.Delhi is ranked 5th among 21 cities of India for its transparent governance and administrative practices.

38.The population density is 11297 persons per square kilometer.

39.5 out of 14 original gateways of Old Delhi are still known for their original beauty.

40.The Archaeological Survey of India has detected approximately 1200 heritage sites in the city of Delhi, which is more than the heritage site of any city in the world.

41.India Gate is the national monument of Independent India. 43-meter high gate located on the Rajpath of New Delhi is considered as All-India War Memorial.

42.Lakshmi Narayan Temple(also known as Birla Mandir) was inaugurated by the Father of the Nation, Mahatma Gandhi. This temple is one of the famous temples of Delhi.

43.Red Fort, located in Old Delhi, is a historic Mughal-carpeted fort. It is made of red sand and stone. It was built by Shah Jahan.

44.Indian Institute of Technology (IIT) was ranked fourth in science and technology by AsiaVeek.

45.Auto Expo is Asia’s largest auto exhibition which is organized after two years at Pragati Maidan in Delhi.

If you are planning to roam Delhi, you must visit India Gate, Qutub Minar, Red Fort, Lotus Temple, Akshardham.If you know any new things about Delhi, then definitely tell through the comments so that other people can read, thanks.